Malaysia‘s former prime minister today said that Muslims have a right ‘to kill millions of French people’, shortly after a knife-wielding Islamist killed three people in a deadly terror attack in Nice.

Mahathir Mohamad, who lost power in Muslim-majority Malaysia in February, claimed that freedom of expression does not include ‘insulting other people’ amid a row over cartoons of the Prophet Mohammed.

The 95-year-old politician said he did not approve of the beheading of a French school teacher for sharing caricatures of the Prophet, but said: ‘Irrespective of the religion professed, angry people kill’.

‘The French in the course of their history [have] killed millions of people. Many were Muslims,’ he said in a tweet which has since been removed for violating the website’s rules.

Mahathir, who has drawn controversy for comments about Jews and LGBT people in the past, went on: ‘Muslims have a right to be angry and to kill millions of French people for the massacres of the past.’

The Malaysian politician said that ‘by and large’, Muslims have not applied the principle of ‘eye for an eye’: ‘Muslims don’t. The French shouldn’t. Instead the French should teach their people to respect other people’s feelings’.

Mahathir, who served as Malaysian premier twice for a total of 24 years, said that French President Emmanuel Macron was ‘very primitive’ and ‘not showing that he is civilised’. 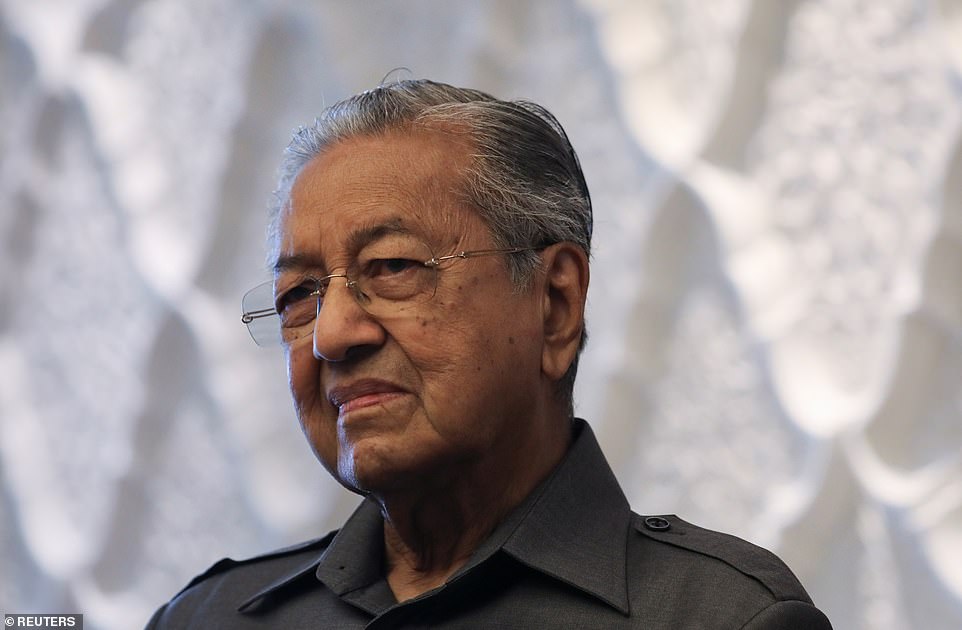 Malaysia’s former PM Mahathir Mohamad, pictured in Kuala Lumpur earlier this month, said that Muslims ‘have the right to be angry and to kill millions of French people’

Three people have died – two of whom were beheaded – after a knifeman attacked the Notre Dame basilica in Nice at 9am on Friday, before he was shot and arrested by police 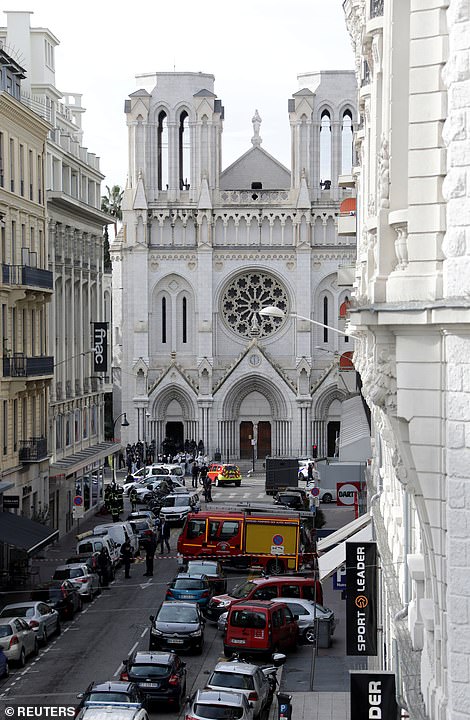 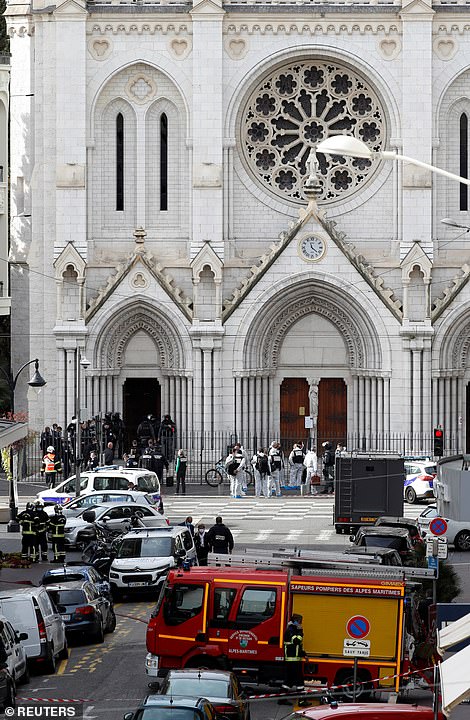 An elderly woman who had come to the church early to pray was the first to be beheaded before a male church warden was also killed. A third woman was then stabbed multiple times, ran across the street, and died of her injuries 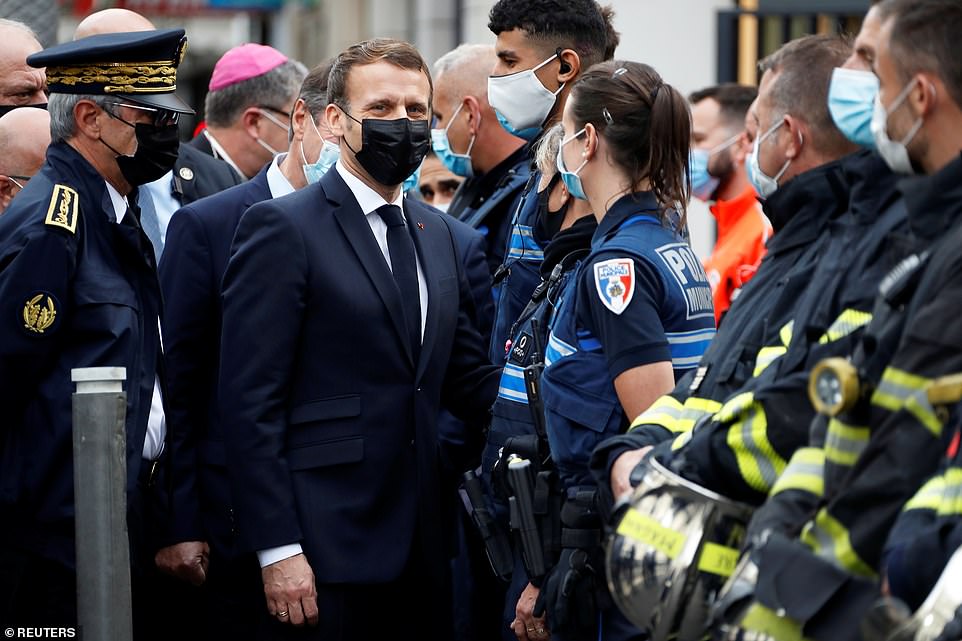 Emmanuel Macron arrives at the scene of the attack, where he spoke with paramedics and police officers 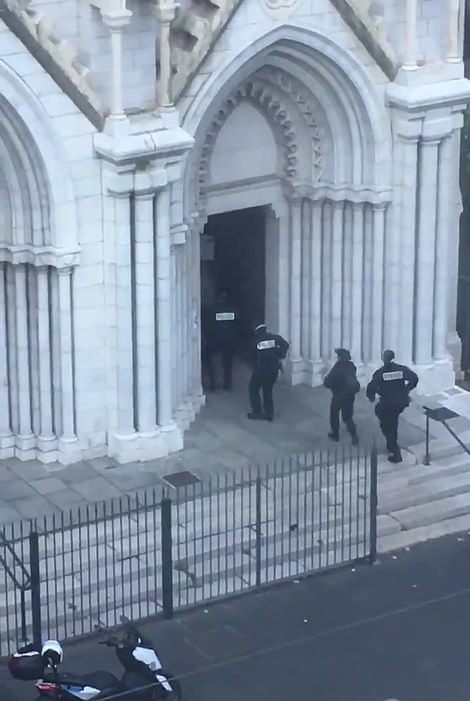 Police swarmed the area around 9am, running into the church before the attacker was shot and arrested. Mayor Christian Estrosi said the attacker kept shouting Allahu Akbar even after being medicated 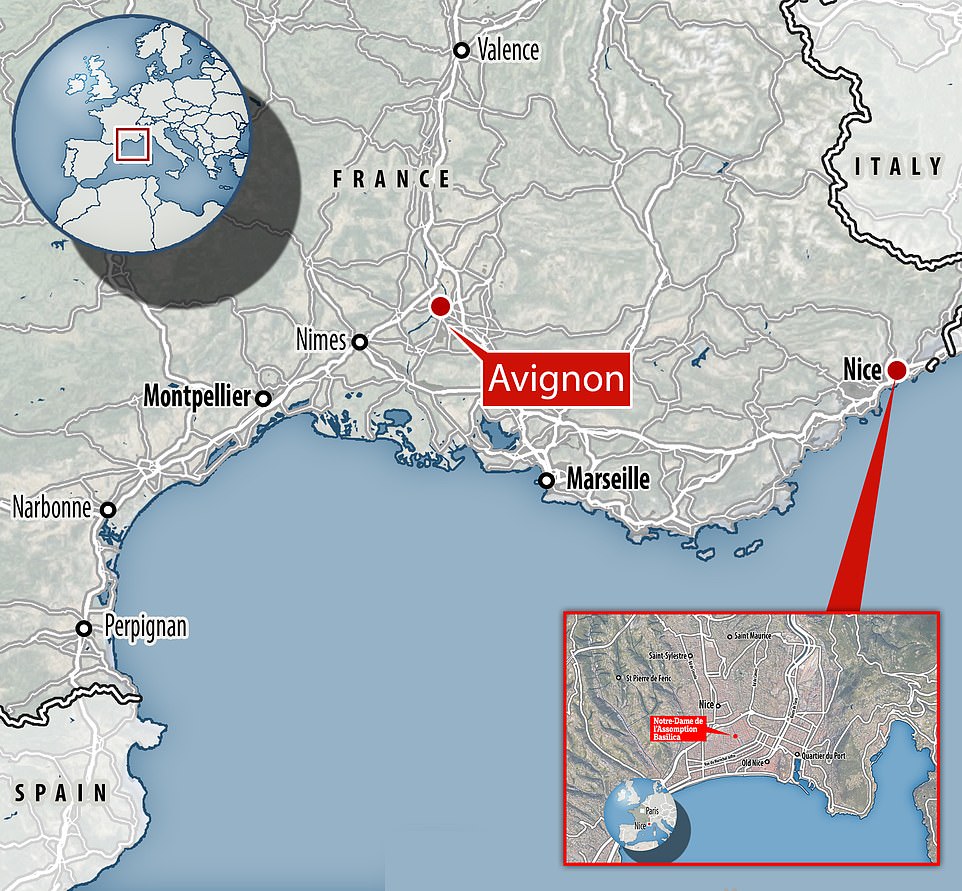 The first attack took place at 9am in Nice, before the second attack in Avignon two hours later. Separately, a guard at the French consulate in Jeddah, Saudi Arabia, was stabbed

The head of a UN anti-extremism body expressed ‘deep concern’ Wednesday about growing tensions over satirical cartoons of the Prophet Mohammed, urging ‘mutual respect’ between people.

The statement by Miguel Angel Moratinos – who heads the United Nations Alliance of Civilizations – follows growing anger in the Muslim world over France’s response to the beheading of a teacher who had shown his pupils the images as part of a class on free speech.

President Emmanuel Macron has vigorously defended the publication of cartoons depicting the Prophet Mohammed on free speech grounds, sparking angry protests across swathes of the Muslim world and campaigns to boycott French products.

The UN High Representative ‘is following with deep concern the growing tensions and instances of intolerance triggered by the publication of the satirical caricatures depicting Prophet Mohammed,’ a spokesman said.

‘The inflammatory caricatures have also provoked acts of violence against innocent civilians who were attacked for their sheer religion, belief or ethnicity.

‘Insulting religions and sacred religious symbols provokes hatred and violent extremism leading to polarization and fragmentation of the society.’

‘The French should teach their people to respect other people’s feelings,’ he said.

‘Since you have blamed all Muslims and the Muslims’ religion for what was done by one angry person, the Muslims have a right to punish the French.

‘The boycott cannot compensate the wrongs committed by the French all these years.’

France’s digital minister demanded the company also ban him from its platform, with Cedric O saying he told the managing director of Twitter in France that Mahathir’s account ‘must be immediately suspended.’

Mr O tweeted on Thursday. ‘If not, @twitter would be an accomplice to a formal call for murder.’

The former Prime Minister made no direct reference to the attack in a church in Nice today, but his comments come amid fury across the Islamic world at President Emmanuel Macron for defending satirical cartoons of the Prophet Mohammed, and on the day that Sunni Muslims mark the Prophet’s birthday.

It also comes less than two weeks after a schoolteacher, Samuel Paty, was beheaded north of Paris for showing cartoons of the Prophet to his class in a lesson on free speech.

Today, Vincent Loques, 45, a sacristan of the Notre Dame basilica in the city of Nice, was brutally killed as he prepared for the first Mass of the day after 21-year-old Tunisian migrant Brahim Aoussaoui attacked the church.

Aoussaoui is thought to have beheaded an elderly female parishioner who had come to to pray as the church opened before attacking Loques, then fatally stabbing a second woman who ran across the street before dying of her injuries. Armed police arrived 10 minutes later and shot Aoussaoui, before arresting him.

Elsewhere a security guard was stabbed and wounded outside the French consulate in Jeddah, Saudi Arabia, while two other men were arrested – one while carrying a knife near a church in Sartrouville after his father reported he was about to carry out a Nice-style attack, and another who tried to board a train in Lyon carrying a long blade. 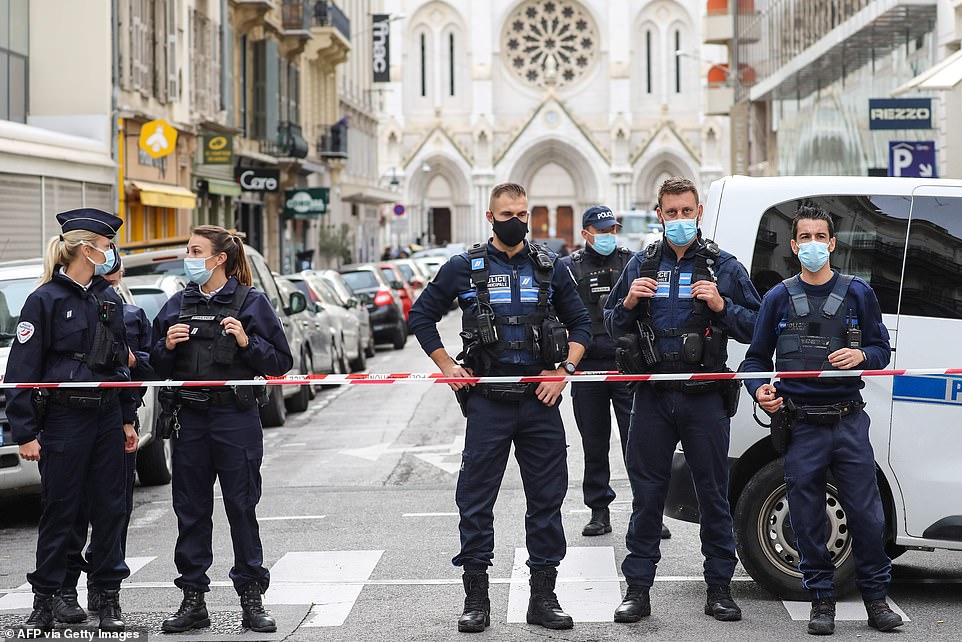 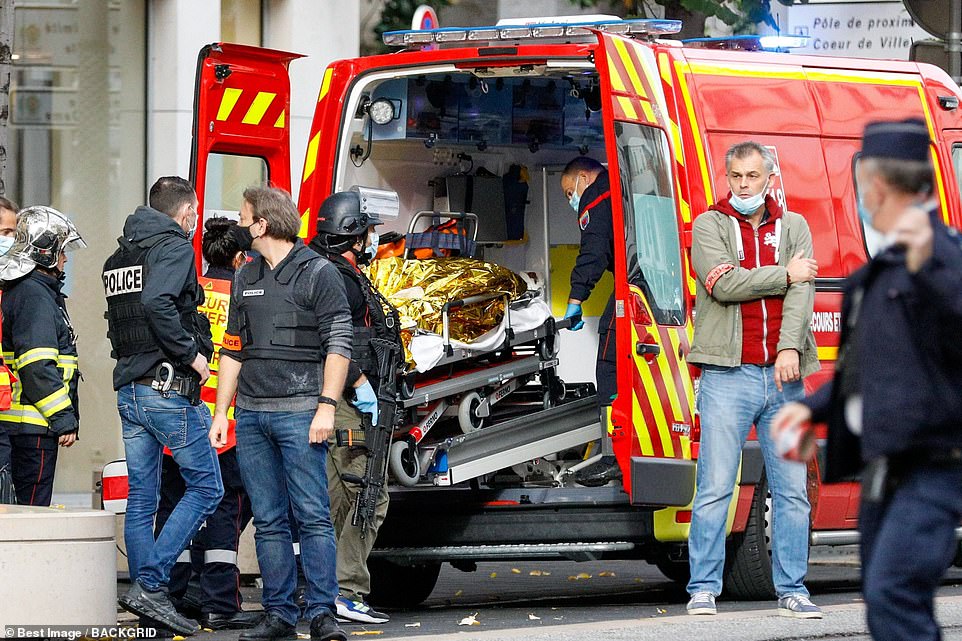 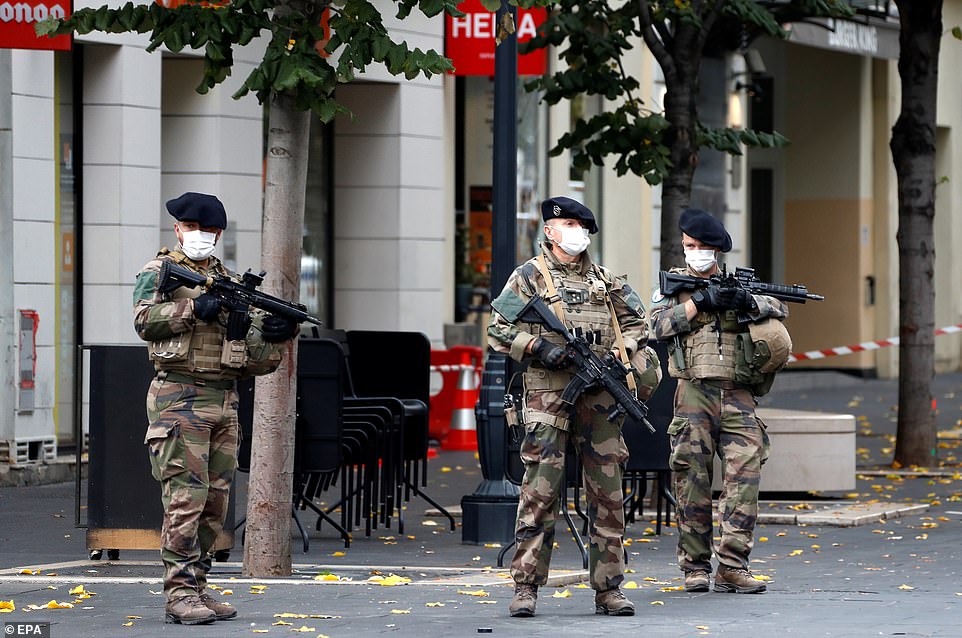 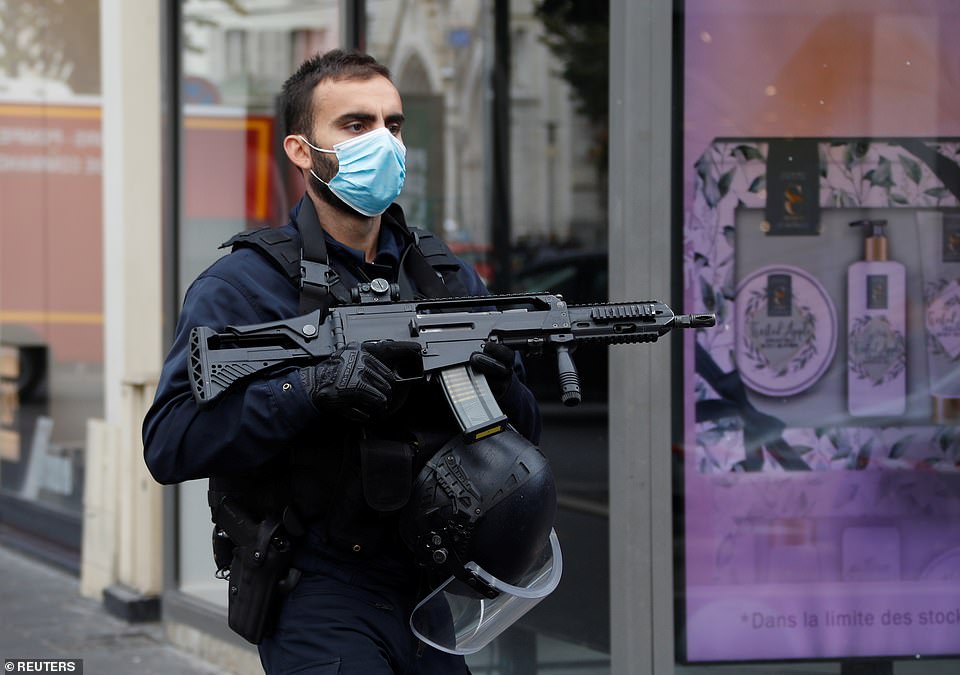 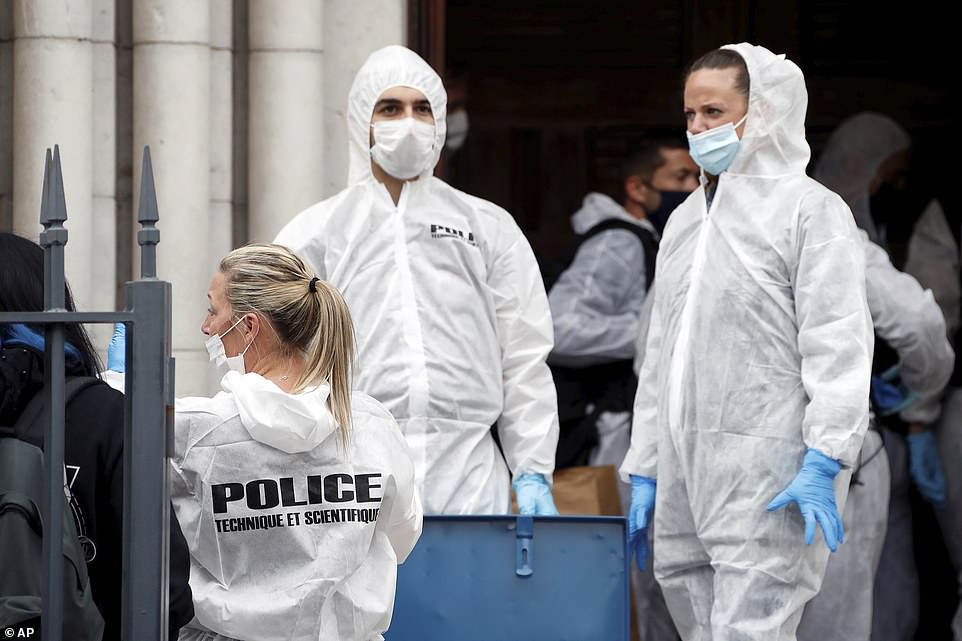 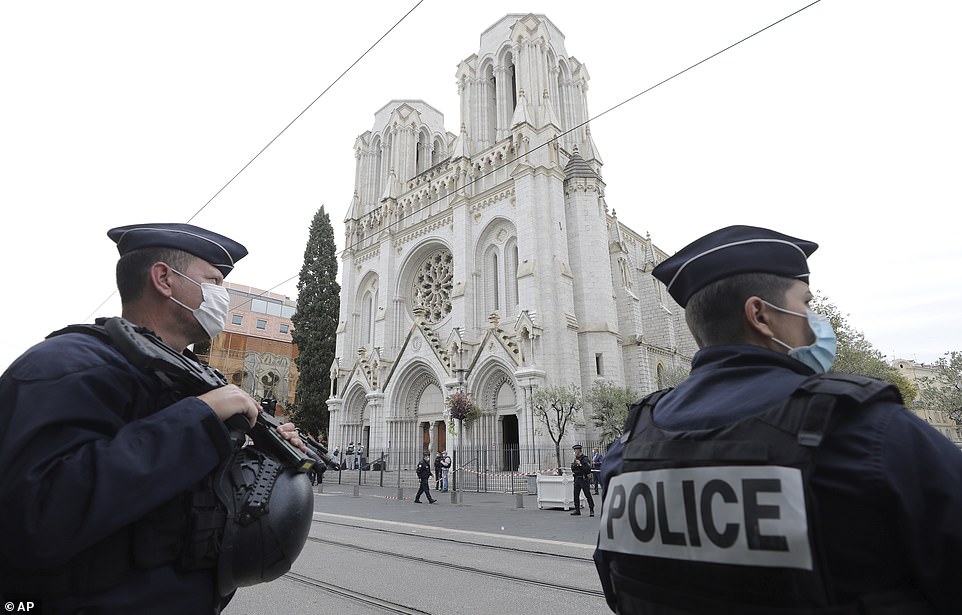 It was thought that police had foiled another Islamist attack in the town of Avignon when an armed man was shot dead by officers after refusing to drop his weapon.

However, it later transpired the man was part of the far-Right, anti-Islam Identarian Movement, and had made a Nazi Salute. French media initially reported the man shouted ‘Allahu Akbar’, which turned out to be incorrect.

The beheading of teacher Mr Paty prompted President Macron to promise a crackdown on Islamic extremism.

Mr Macron and others have also launched a full-throated defence of freedom of expression and the right to mock religion, in a move which has inflamed tensions in several Muslim countries.

The latest in a long line of violent attacks in France was ‘already being celebrated massively across jihadi communities’ by late Thursday, according to the SITE Intelligence monitoring group.

SITE director Rita Katz said it was ‘hard to recall social media celebration this massive for terrorism’ with jihadists taking to Twitter and Facebook to welcome the latest grisly murders.

Katz said that jihadists were celebrating the attackers ‘freedom of action’ after three violent episodes in the space of a few hours. ‘These new attacks comes amid a massive and enduring wave of jihadi media condemning France and its cartoonists,’ she said.

A report by SITE said that jihadists were ‘overjoyed’ by the news from Nice, Avignon and Saudi Arabia today.

Extremists linked to both ISIS and al-Qaeda have seized on the beheading of Samuel Paty earlier this month to incite more attacks against France. 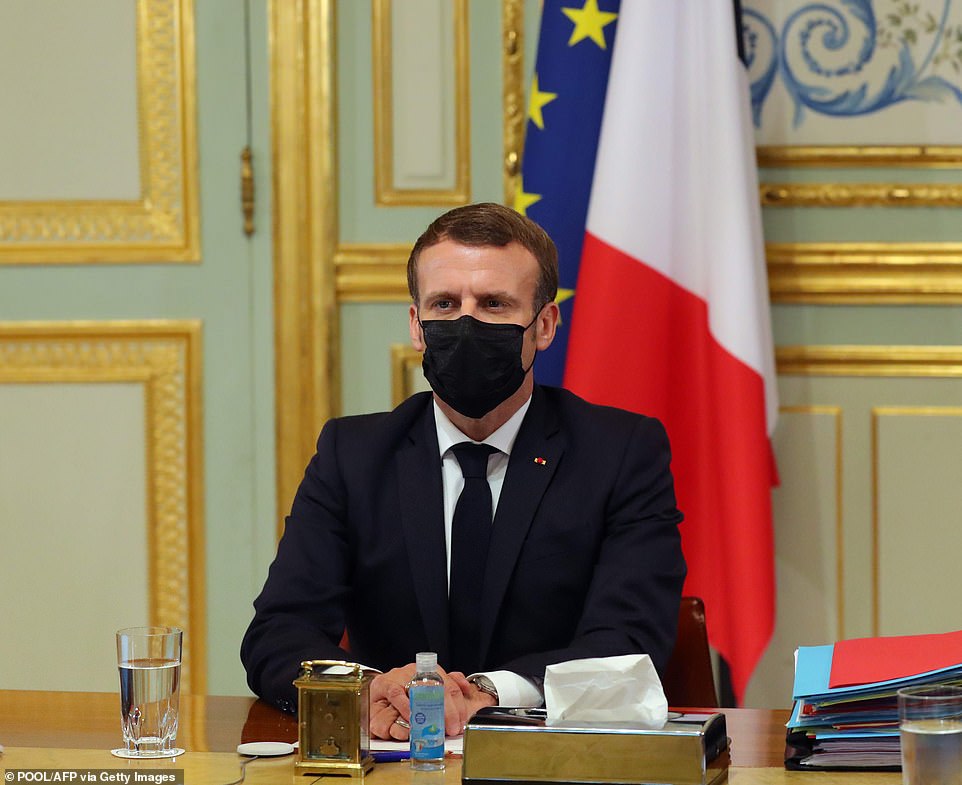 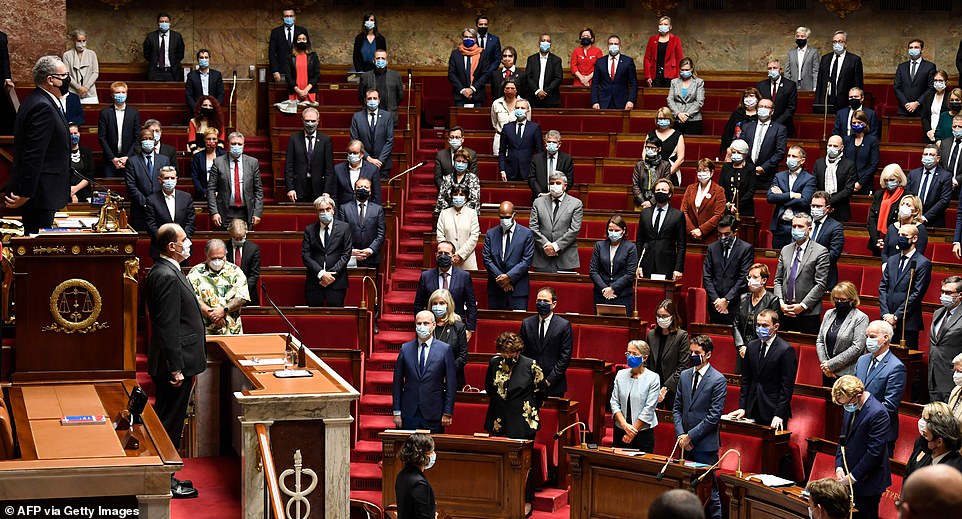 Katz said that the ‘prospect of co-ordination’ between the various attackers seemed ‘increasingly plausible’, although not confirmed.

The two recent attacks are the latest in a long line of terror attacks in France in recent years, including the Charlie Hebdo massacre in 2015.

French politicians lined up to demand tougher action against Islamist terrorism today after the triple murder.

Nice’s mayor Christian Estrosi said today that ‘enough is enough… it’s time now for France to exonerate itself from the laws of peace in order to definitively wipe out Islamo-fascism from our country’.

One of Mr Macron’s party colleagues called for ‘total mobilisation’ against extremism in what another called a ‘war that the Islamists are waging on our nation’.

Within hours of the Nice attack, a gunman had been shot dead by police in Paris while a knifeman was arrested for attacking a guard at a French consulate in Saudi Arabia.

Speaking in parliament, where he had earlier been talking about France’s new lockdown, Mr Castex said the Nice attack was ‘as cowardly as it is barbaric’. 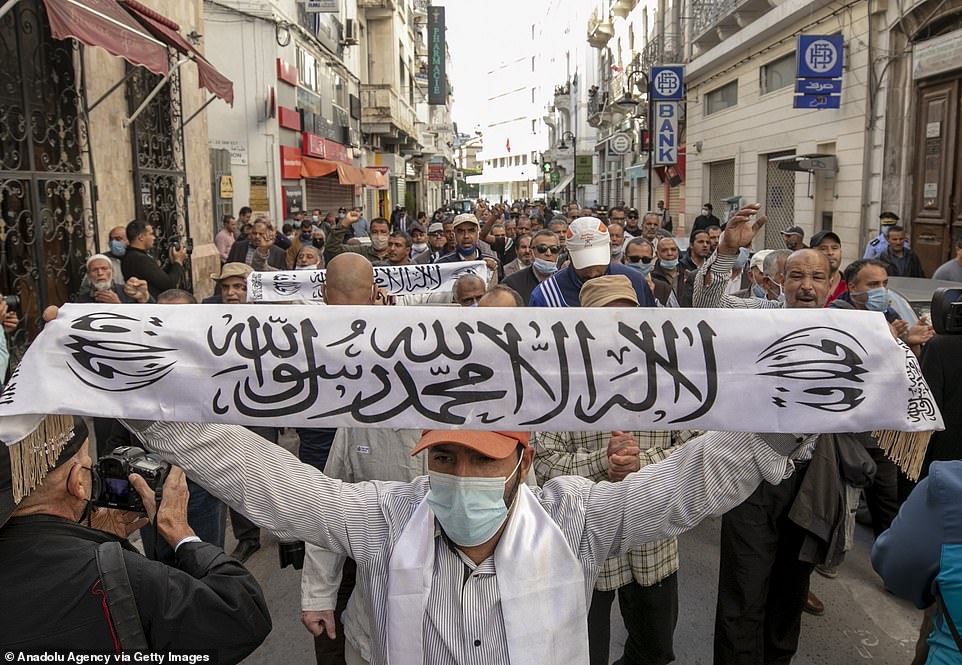 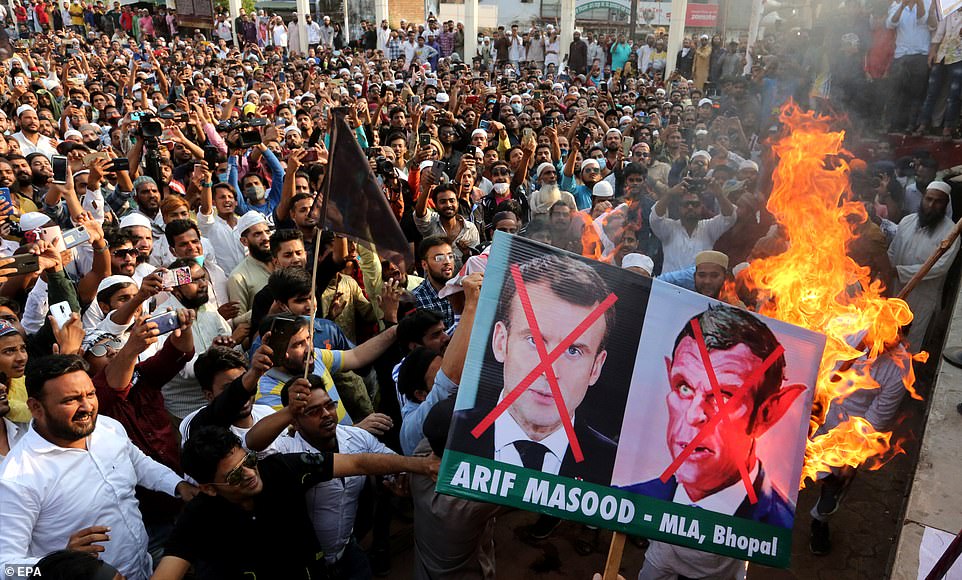 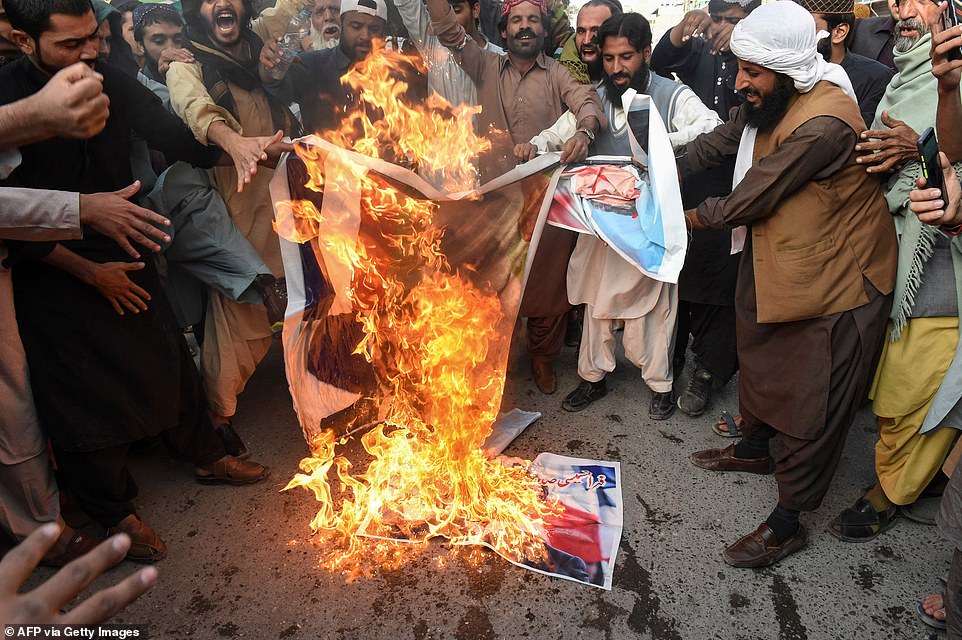 Muslims demonstrators burn posters of Emmanel Macron during a protest in Quetta, Pakistan, on Thursday

TERROR IN FRANCE: HOW ATTACKS HAVE UNFOLDED OVER FIVE YEARS

An attacker with a knife killed three people and wounded several others at a church in Nice on Thursday, police said.

The terror attack took place less than two weeks after the beheading of middle school teacher Samuel Paty by a man of Chechen origin.

Paty’s attacker said he wanted to punish him for showing pupils cartoons of the Prophet Mohammad in a civics lesson.

Here are other attacks that have taken place in France over the past few years:

Sept 25, 2020 – Two people are stabbed and wounded in Paris near the former offices of the Charlie Hebdo satirical magazine, where Islamist militants carried out a deadly attack in 2015. A man originally from Pakistan was arrested

Oct. 3, 2019 – Mickael Harpon, a 45-year-old IT specialist with security clearance to work in the Paris police headquarters, killed three police officers and one civilian employee before being shot dead by police. He had converted to Islam about 10 years earlier.

March 23, 2018 – A gunman kills three people in southwestern France after holding up a car, firing on police and taking hostages in a supermarket, screaming ‘Allahu Akbar’. Security forces storm the building and kill him.

July 26, 2016 – Two attackers kill a priest and seriously wound another hostage in a church in northern France before being shot dead by French police. Francois Hollande, who was France’s president at the time, says the two hostage-takers had pledged allegiance to Islamic State.

July 14, 2016 – A gunman drives a heavy truck into a crowd celebrating Bastille Day in the French city of Nice, killing 86 people and injuring scores more in an attack claimed by Islamic State. The attacker is identified as a Tunisian-born Frenchman.

June 14, 2016 – A Frenchman of Moroccan origin stabs a police commander to death outside his home in a Paris suburb and kills his partner, who also worked for the police. The attacker told police negotiators during a siege that he was answering an appeal by Islamic State.

Nov. 13, 2015 – Paris is rocked by multiple, near simultaneous gun-and-bomb attacks on entertainment sites around the city, in which 130 people are killed and 368 are wounded. Islamic State says it was responsible for the attacks. Two of the 10 known perpetrators were Belgian citizens and three others were French.

Jan. 7-9, 2015 – Two Islamist militants break into an editorial meeting of satirical weekly Charlie Hebdo on Jan. 7 and rake it with bullets, killing 12 people. Another militant kills a policewoman the next day and takes hostages at a supermarket on Jan. 9, killing four before police shoot him dead.